March 29, 2012
What, you thought the fact that I can't ride a bike means I can't compete in my very own triathlon at home? Well, it doesn't. Also ignore the fact that the largest body of water I've seen in a while is the bathtub. This triathlon was the real deal, folks.

First event: Biking
I know swimming is traditionally supposed to go first. So sue me. I did an easy bike ride (low-medium resistance) for one hour and covered 15 miles. 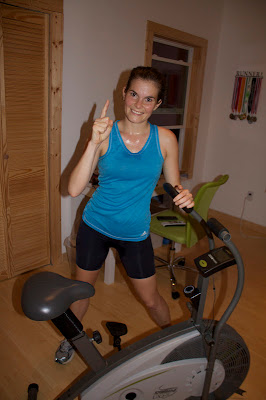 (Transition One: got off bike. Remarked on soreness of womanly places. Hopped on treadmill.)

Second Event: Running
When I get on the treadmill I always put the incline to 1% and then start the speed off at 6.0 miles per hour. I accidentally pressed 6 twice (so a 9:05 pace) and just went with it. My legs felt pretty weird after the bike, but completely warmed up and no hip pain at all. Pretty incredible, actually. I finished the 5k in 27:29 which is basically record time for me. 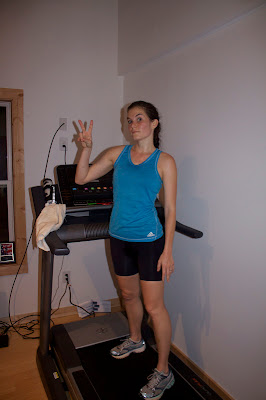 Third Event: Swimming
Alright, fine. You got me. I actually just took a shower for this one. I guess I have a little more work to do before I sign up for that Ironman, huh?

Of the three sports in a triathlon, what is your strongest/weakest?
I would definitely say running is easiest for me. While swimming is tough, biking would be hardest since if it moves I'm bound to fall off of it.

What do you think is harder - a 100 mile race or a full Ironman?
Hmm....I'm not sure about this one. I used to live in Kona so I saw how much effort goes into an Ironman, but I also think the mental struggle of a 100 mile run must be insane.

May 05, 2014
Do you remember a few weeks back, when I was all braggy about running in Florida in February/March? Sunny mornings around a lake with a light breeze off the water have turned, cruelly, into humid stretches of time where I am humbly reminded of my own limitations.

You guys, I see these gazelle-like creatures, men and women alike, who prance on my running route with compression socks, a soft glow of perspiration at their brow. It's beautiful. It's also a harsh reminder that I am not them. I am currently running in the thinnest, smallest items of clothing I can without offending anyone (shirt stays on, people). I dare not step outside without some awful visor or wide-brimmed hat. When I hop in the shower after a run, my face is a deep crimson that causes my husband to voice his concern for my general well-being.

Have I mentioned this is what happens after my easy runs, with a few walk breaks thrown in? Yeah. It's humbling.

September 06, 2012
Working from home has its perks. Sure, my social interaction skills are deteriorating rapidly and casual dress Fridays now include those old ratty boxers and that one race shirt with the hole, but I also get to enjoy things like eating lunch at 10:30 because I feel like it and deciding where I want to work. Like on the treadmill.

Between working at my desk all day, using my computer for fun and then sitting on the couch watching television most nights for an hour or two, it's safe to say I sit on my ass a lot. And yep, that's not so great for you. Even though I work out 6 days a week, I hate that I spend easily 75% of my waking hours sitting.

On a whim, I asked Tim if he could build me a treadmill desk. I've seen these massive contraptions to make treadmill desks, but they basically transform it into a full-time desk, and I still want to use my treadmill for running (sans desk) as well. Magic carpenter man took a few measurements and brought me in a prototype by lunchtime.…
28 comments
Read more

Are You a Salty Sweater? The Truth About Sodium and Running

July 14, 2011
Before I started running regularly, I did my best to avoid salt. After all, if you want to lose weight you're supposed to reduce sodium, right? Here's what the American Federal Government's recommendations for sodium intake (as of January 2011)


Now most of the time, I don't have an issue with this. Salt isn't used too much in my cooking, and I avoid a lot of common processed foods filled with sodium. When I do indulge in a salty meal, usually from a restaurant, I get the associated water weight gain and bloating. So I'm happy to stick to my meeting my 2,300 mg. requirements each day.

And then...summer arrives. If you're running in high humidity, you sweat. A lot. It's not pretty, and you're draining your body of electrolytes like sodium. On my long runs, I take precauti…
29 comments
Read more