March 18, 2012
Today was my first big girl race. I have only ever run trail races, small town races and even my marathon had less than one thousand finishers. Today there were close to twenty thousand runners doing the Publix Georgia full and half marathons and I will admit I was kind of freaked out. 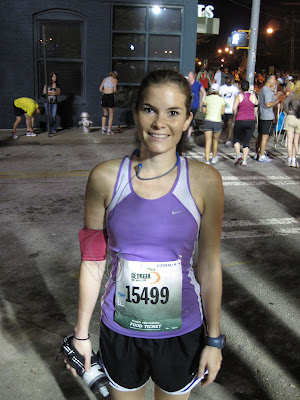 I guess I had visions of being trampled by thousands of angry runners who were upset I snuck into their corral but it turned out okay after all. The race began at 7am in the dark which was another first for me. I got into Corral H which was clearly marked and may have started dancing. Come on - they were playing LMFAO before a race. I got pumped and started the shuffle to the start. 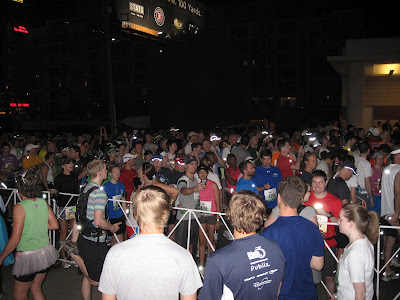 Since it was my first race of this size I wasn't sure how long it would take me to get across the start line but it was about 7 minutes so definitely not bad at all. I made friends with the runners in my corral and we prayed that no full marathon runners would cross the finish line before us. (I was spared - I think the winners started coming in a good ten or fifteen minutes after me, thank God.)
The temperatures at the start were almost 70 and I was drenched by mile one even though it was still dark. Thankfully most of the course is shaded and I was really only in the sun the last two miles or so. As for the elevation of this course: there is no flat. Really, I promise I'm not exaggerating. On the plus side there are definitely a lot of downhills to balance out the uphills.

Toward the end I was praying for a flat piece of road but it was either up or down the whole way. Most runners around me were able to maintain a pretty steady pace the whole time so it was definitely me who just needed to be stronger.
Highlights of the Course:
-Great crowd support. Groups of neighbors came out to cheer and it was a fun atmosphere.
-A lot of people who were clearly still out from their Saturday night before were cheering us on and pretty entertaining to watch.
-Water spray stations to cool runners down (twice on the half marathon course).
-Water/Gatorade nearly every mile and Gu in the middle.
As soon as I crossed the finish line I started being handed stuff and I liked that. I ran out of hands because I basically took anything that was being passed out. After my medal and (ice cold) water and chocolate milk I grabbed a cold towel full of ice water and then found Tim for a regulation post-race shot. 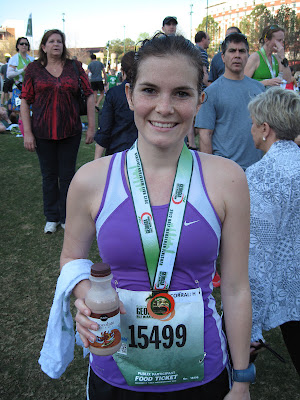 Do you see that, chocolate milk people? I'm shilling your products. Send me awesome places now, please. Thank you. After I downed my drinks I got a bag of food (the sponsor was Publix) and I thought it was a good haul post-race: cookies, M&Ms, banana, pretzels and granola bar.
For all of you people who are secretly hoping I was sick during this race - I was ok! I started feeling bad every time I started pushing it up a hill so I ended up walking maybe 10 times to catch my breath every time I felt sick and I was fine. I decided early on with the heat and hills just to take it easy and I'm so glad I did. Final time/ranks as follows:
Chip Time: 2:20:12
Division Place: 188/385
Sex Place: 2454/5113
Overall Place: 5337/9123
I think that puts me solidly in the middle of each category. I can do average so incredibly well!
I had to check out of the hotel early this morning so I just headed back to the room and showered after the race. I wish I had stuck around because the whole post-race party looked like a lot of fun. I had my own party after all because Tim and I went to Ikea. I managed to find somewhere comfy to relax, don't worry: 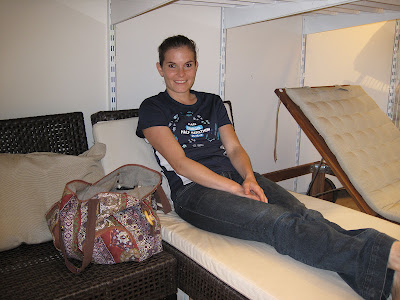 The alleged reason we went to Ikea was to look at rugs and blinds but really I just wanted to eat lunch there. They have these amazing veggie wraps and I get one almost every time I go. Today, though, I was really needing more than a veggie wrap. Solution? Get two meals. 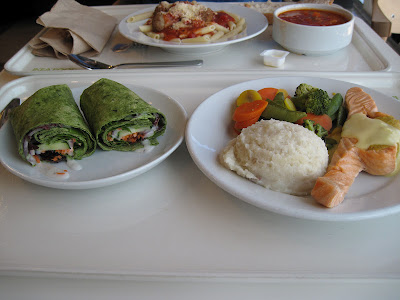 Veggie wrap on the left and salmon, mashed potatoes and vegetables on the left. Perfect. Tim had pasta which is such a waste to me. PASTA IS CHEAP - eat it at home!
Oh, I should also say - the tech tee and the medal are both the best I have gotten from a race. The medal is heavy and clearly that means I am a better runner. It makes sense in my head.
Do you prefer big or small races?
I've always said small races but now I want to say big ones. As long as I am staying close by and can walk to the start it is really ideal.
Would you rather pay for cheap race with no extras or pay a little more for a nice tech tee, medal, snacks, etc.?
I would still probably pick the cheaper races because of budget but I certainly like the perks!

May 05, 2014
Do you remember a few weeks back, when I was all braggy about running in Florida in February/March? Sunny mornings around a lake with a light breeze off the water have turned, cruelly, into humid stretches of time where I am humbly reminded of my own limitations. You guys, I see these gazelle-like creatures, men and women alike, who prance on my running route with compression socks, a soft glow of perspiration at their brow. It's beautiful. It's also a harsh reminder that I am not them. I am currently running in the thinnest, smallest items of clothing I can without offending anyone (shirt stays on, people). I dare not step outside without some awful visor or wide-brimmed hat. When I hop in the shower after a run, my face is a deep crimson that causes my husband to voice his concern for my general well-being. Have I mentioned this is what happens after my easy runs, with a few walk breaks thrown in? Yeah. It's humbling. Now, I'm not complaining. It's beautiful
28 comments
Read more

September 06, 2012
Working from home has its perks. Sure, my social interaction skills are deteriorating rapidly and casual dress Fridays now include those old ratty boxers and that one race shirt with the hole, but I also get to enjoy things like eating lunch at 10:30 because I feel like it and deciding where I want to work. Like on the treadmill. DIY Treadmill Desk Between working at my desk all day, using my computer for fun and then sitting on the couch watching television most nights for an hour or two, it's safe to say I sit on my ass a lot. And yep, that's not so great for you. Even though I work out 6 days a week, I hate that I spend easily 75% of my waking hours sitting. On a whim, I asked Tim if he could build me a treadmill desk. I've seen these massive contraptions to make treadmill desks, but they basically transform it into a full-time desk, and I still want to use my treadmill for running (sans desk) as well. Magic carpenter man took a few measurements and brought m
29 comments
Read more

How to Gain 10 Pounds Overnight

May 03, 2012
I have blogged a few times pretty generically about "digestive issues" and how they pertain to my running. The last few months I have been struggling to find foods that don't upset my stomach in some way or another. I have no problems with lean meats and vegetables, but that does not a diet make -at least not for anyone who likes to run. So while I try my best to avoid foods that cause me to puke during a race or run to the bathroom 5 times during a treadmill run, my body still has not been cooperative. Case in point: No, I'm not 6 months pregnant. This is one of my recent "gain ten pounds overnight" phases. Fun, right? Something I am eating/doing drinking will cause my stomach to go from relatively flat to "how far along are you?" in a matter of minutes. As you might be able to guess, trying to run with a sudden ten pound weight gain is not fun. So after lots of planning/calling/making appointments/etc. I finally got to an appointment wi
54 comments
Read more