January 16, 2012
Almost exactly one year ago Tim and I moved to Georgia to build our own house. When we arrived, the land we purchased looked like this: 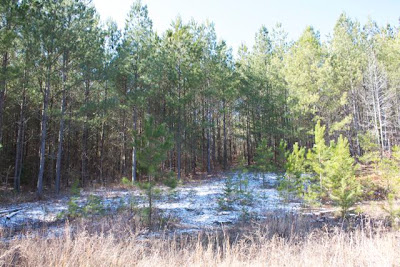 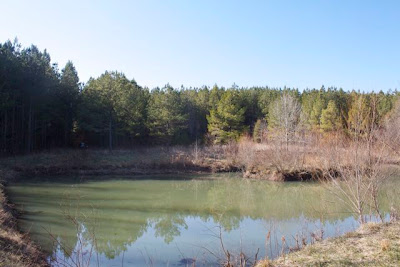 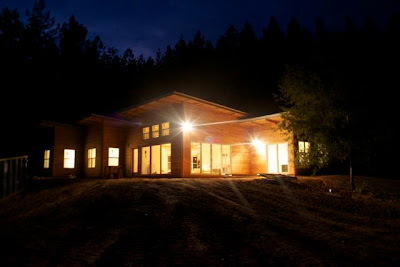 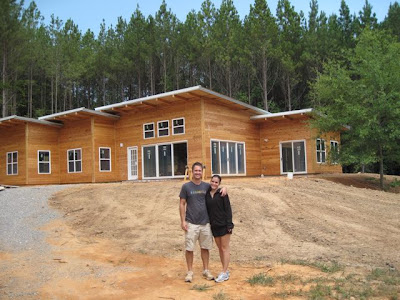 Not bad, right? Although Tim and I both had very little experience with building a home (and by very little, I do mean NONE).

I thought it might be interesting to see the various steps we went through over the last 12 months to build our dream home. Keep in mind that this post doesn't even BEGIN to cover it all. If you are super interested in this kind of thing, check out Tim's blog for more details. 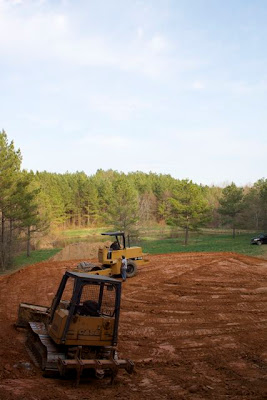 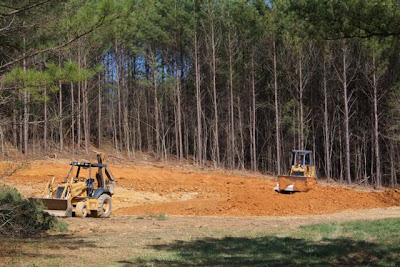 Next, we plotted out the area for the foundation base on hubby's design for the house. It rained right before we laid the concrete, which meant an emergency shoveling session to clear out the space. The next day the cement was put down. 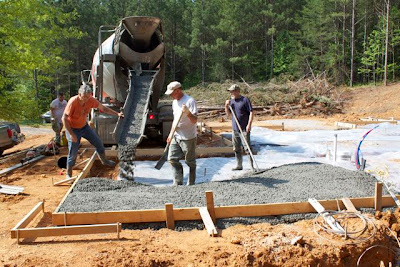 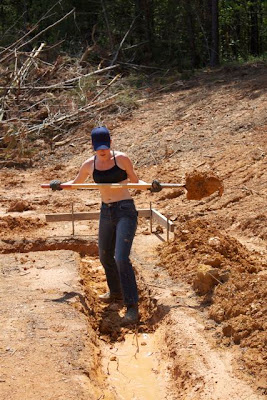 Once the foundation was set, we got to the good stuff. The house was built with custom made and pre-built panels. Kind of like giant pieces of Lego. Both are equally challenging to me. 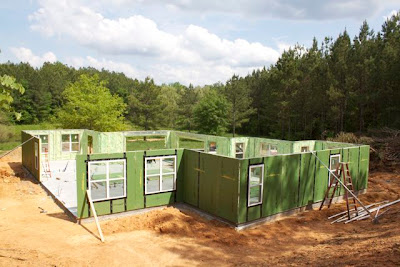 The interior framing was next. Once it was finished we could begin to put on the roof panels, which again were pre-made to fit the design of the home and filled with soy foam insulation. 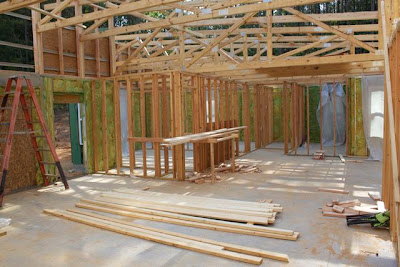 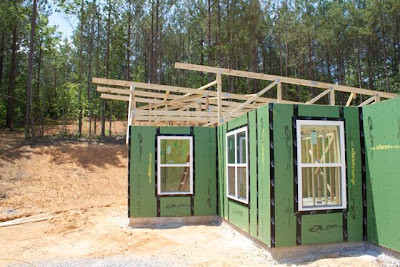 After the roof was on, it was time to have the walls insulated one more time to make it an energy efficient as possible. Drywall went up and Tim and I spend a LONG time installing the cedar siding around the entire house. 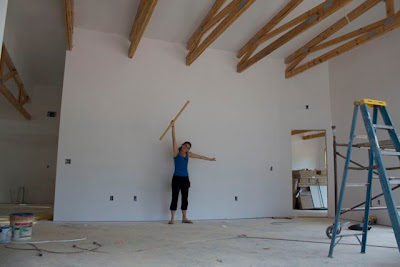 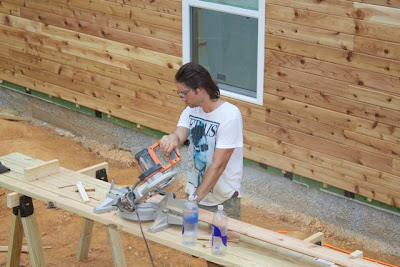 Along the way we dug a well, got electricity to the land and developed the sewage system. Thankfully we also got to move to the interior. Hubby spent days and days tiling the floors and laying down the bamboo floors in the other rooms. This is the part where I started working full time and did less and less with the house, while hubby took on more.
Multiple trips to Ikea meant he could tackle the kitchen, turning this: 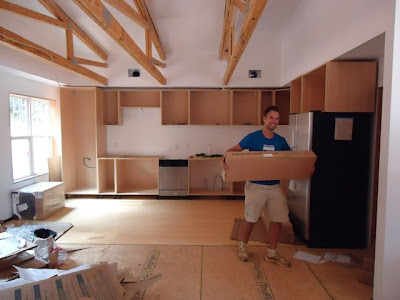 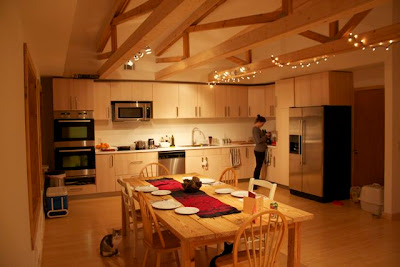 And there you have it! So easy, right? All it takes is 12 months and your entire life savings. Nothin'.
Would anyone be interested in a house tour of the completed space? I'm debating whether that's weird (my bed! my chair! my tv!) or awesome. Let me know!
Have you ever tackled a home build or remodel in the past? Do you ever want to in the future?
Obviously this was a first. I'll be honest and say I have no desire to do it again. Hubby, on the other hand, would love it. I bet if we had tons and tons of moolah he would want to do it all over again somewhere else.

May 05, 2014
Do you remember a few weeks back, when I was all braggy about running in Florida in February/March? Sunny mornings around a lake with a light breeze off the water have turned, cruelly, into humid stretches of time where I am humbly reminded of my own limitations. You guys, I see these gazelle-like creatures, men and women alike, who prance on my running route with compression socks, a soft glow of perspiration at their brow. It's beautiful. It's also a harsh reminder that I am not them. I am currently running in the thinnest, smallest items of clothing I can without offending anyone (shirt stays on, people). I dare not step outside without some awful visor or wide-brimmed hat. When I hop in the shower after a run, my face is a deep crimson that causes my husband to voice his concern for my general well-being. Have I mentioned this is what happens after my easy runs, with a few walk breaks thrown in? Yeah. It's humbling. Now, I'm not complaining. It's beautiful
55 comments
Read more

September 06, 2012
Working from home has its perks. Sure, my social interaction skills are deteriorating rapidly and casual dress Fridays now include those old ratty boxers and that one race shirt with the hole, but I also get to enjoy things like eating lunch at 10:30 because I feel like it and deciding where I want to work. Like on the treadmill. DIY Treadmill Desk Between working at my desk all day, using my computer for fun and then sitting on the couch watching television most nights for an hour or two, it's safe to say I sit on my ass a lot. And yep, that's not so great for you. Even though I work out 6 days a week, I hate that I spend easily 75% of my waking hours sitting. On a whim, I asked Tim if he could build me a treadmill desk. I've seen these massive contraptions to make treadmill desks, but they basically transform it into a full-time desk, and I still want to use my treadmill for running (sans desk) as well. Magic carpenter man took a few measurements and brought m
30 comments
Read more

April 21, 2014
When I got on the plane to fly from Washington to Florida, and after I had paid a silly amount of money to connect to the Internet from 35,00 in the sky, I received an email from Online Shoes asking if I would like to try and review the New Balance W980 Fresh Foam running shoe. Never one to look a gift horse in the mouth, I gladly accepted without even looking up anything about the shoe. About six weeks ago, I received the shoes on my doorstep, unpacked the box like a kid on Christmas, and kind of...grimaced. The first time I saw these shoes, I thought they looked a little gaudy. Not quite Hoka/Vibram level obnoxious, but definitely too bright and clunky-looking for my personal tastes. As of today, the color combination no longer shocks me every time I open my closet door, and I actually quite like the brightness. However, I would certainly not recommend them for anyone in search of running shoes to blend in. On that note, what happened to boring running shoes? Are they all n
2 comments
Read more